My memory is somewhat foggy, as I spent the last week engaged in debauchery. Not really. I did, however, join Jeff and some of our (and some of really just his, if truth be told) friends at the New Onyx resort in Punta Cana. ‘Twas Jeff’s 50th birthday bash.

I missed Luke, Meg, and Zac terribly. I can’t be away from them for more than a couple of minutes.

The following consists of some of the workout that I did at the New Onyx gym. I’m pleased to say that the resort had a rather nice facility (Abmats, free weights, kettle bells etc.dd). We tended to go at 8 am and that also seemed to be the busiest time of the day. That’s understandable. Start the day with a workout. As the gym was often filled with tourists the asshole count was often high.

The following is a description of some of the workouts I completed. Some, but not all, as I didn’t record nor can I recall many.

The biggest challenge was having enough space to work. Oh, and not hitting my head on the low ceiling.

I didn’t have my abacus so I may have forgotten to count a round. I either completed 25 or 26 rounds + 1 pull-up.

How many rounds? I can’t recall.

I kept the treadmill running, and starting and ending the sprint was often a challenge.

That was tough! Sixty-three reps.

Tough. I was exhausted.

The gym was crowded and I used the only available treadmill. I felt sorry for the females on both sides of me, as I did indeed sweat.

And then it happened. Yup, some dude wanted to know what I was doing, if I was a runner, what app I was using, etc. Uhm, same dude did really shitty pushups two days prior. I was on vacation so I was nice. Nice for me, that is.

Bench Press
5X5
10 pull-ups immediately after each round

Uhm, the weight was in KGs so I didn’t even bother to attempt to discover what I was lifting. I just knew that the last round was heavy.

And some dude asked, “Are you using that bench?” Uhm, as I was using the bench. Asshole.

Whaaaat? A partner WOD? Yes, because Kelli (and Bill) attended the soiree and Kelly often worked out with Jeff and me. I completed odd- and she completed even-numbered rounds. Time = 11:51.

Jeff and I enjoyed a Gator excursion during our visit. Unfortunately, the Gator kept falling out of gear and, well, stopping. About a third of the way through the ride the staff was kind enough to swap and provide us with a much more powerful Gator. And much faster! Jeff and I were both laughing at the top of our lungs as we drove through the rather expansive mud puddles. Jeff drove after our swim but, after driving for just a short amount of time, stopped the Gator and asked me to drive. “Why?” I asked. “Because you enjoying driving a lot more than I do.” True. Very true.

Jeff and I also enjoyed a spectacular zip line excursion. I take that back. I enjoyed the zip line excursion but Jeff did not. It sometimes boggles my mind how little I fear heights and how much of a thrill seeker I am.

We had the most fun at a water park that also include zip lines. I jumped off of the highest deck! And without a care in the world.

I’ve come to the conclusion that I most enjoy movies that don’t use the soundtrack to manipulate my emotions, foreshadow the plot, or insist that I listen. I’m not going to explain. Suffice it to say that the soundtrack to “God’s Country” and LB were much better than the soundtrack for BP. 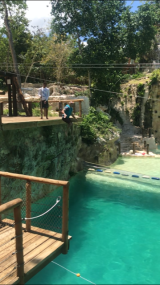 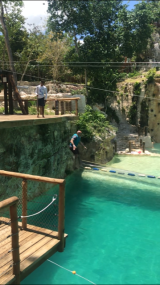 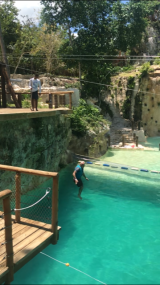