The high in Asheville today was a mere 42 and it was 37 when Jeff and I took Luke for his morning walk. We enjoyed a nice breakfast at Edna’s and then I began my workout.

This was the perfect combination, as it allowed enough time to rest between sets, the WBS prepared me for next part of workout, and this forced me to rest long enough between rounds and HPC attempts. Yup, I sometimes don’t rest enough between attempts.

My post-surgery HPC 3RM is 135, so I completed first round @ 65, feeling confident that I’d be able to lift 145 and knowing that I could potentially fail the last set and still get a 10# PR.

As Jeff was home, Luke decided to snuggle with him instead of working out with me. It felt quite odd for him to be absent.

Growing up in South New Jersey the neighborhood celebrated “Mischief Night” the night before Halloween. Neighbors and their homes would be targeted and rotten eggs, rotten tomatoes, toilet paper, etc., would be, well, thrown at homes, trees, telephone lines, etc. I know not why. The next night we’d visit same homes for treats. I suppose the tricks had already occurred. By the way, I was too young to do much mischief.

Again, gripping the bar much farther away from barbell collars makes a world of difference. This was quite fun!

I set a goal to complete in fewer than 5 minutes. ‘Twas challenging to do so, as I only completed 1 round of dus in unbroken reps. I did at least complete PS in unbroken reps, so there’s that.

The kitties wake me up at sunrise. How so? By scurrying up and the stairs, jumping on the bed and me, and meowing. But I love them, so that’s okay.

I feed them first breakfast (they have second breakfast when Luke and I return from our walk), give Luke his morning medication, and prepare the French press. Luke retires to one of the couches. If it’s the couch facing South he naps. If it’s the couching facing East he rests his head on the back of the couch and looks at me longingly as if to say “Hurry the hell up.” He will sometimes go to the front door and whimper. I’ll open the door, ask him if he wants to go outside, and then patiently wait for him to do so. Which he never does. He’d rather wait for me to drink my cup of coffee and then take him for his walk.

I’ll say, “Let’s go for a walk!” and he walks down the hallway to the door leading to the garage. I’ll sit on the top stair to put on my shoes and Luke will either stay there with me or head down the stairs toward the open garage door. He doesn’t, however, go outside but instead waits for me. If we’re driving to our location I’ll unlock the car doors, open the driver side back door, place his stool on the ground, place a foot on the stool (so it doesn’t move), and Luke then jumps in the backseat. 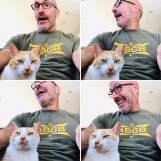 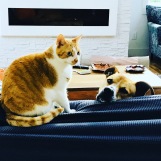 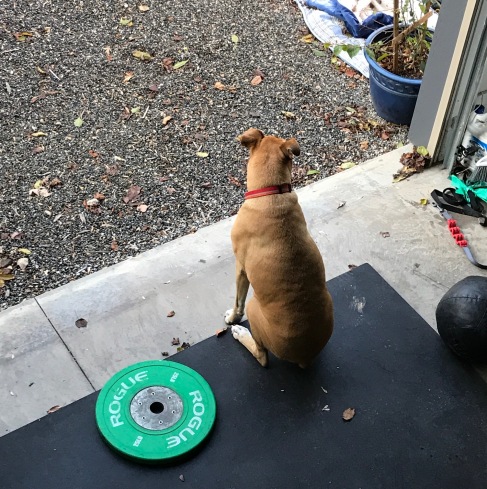 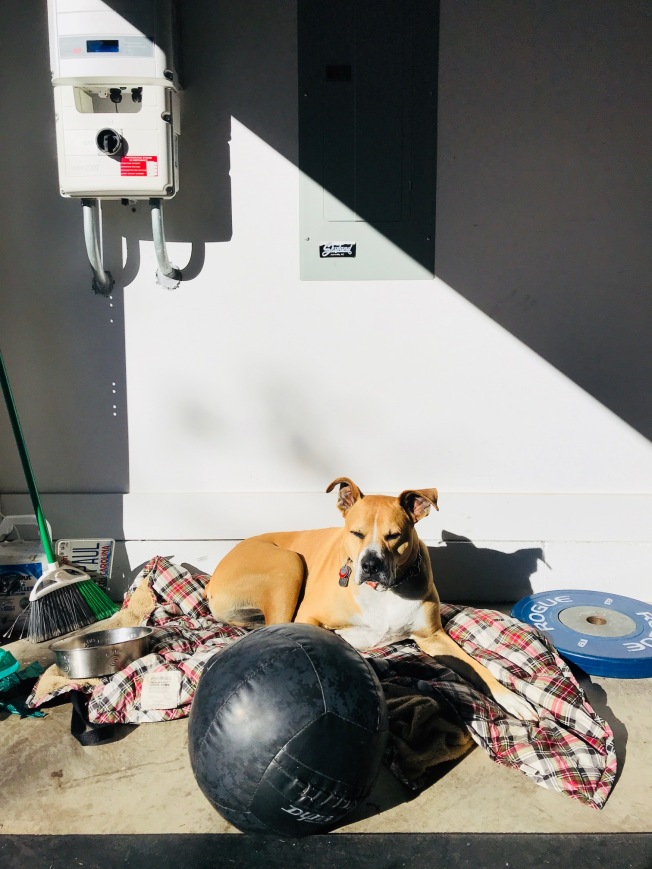 ‘Twas a glorious morning and Luke was in the mood to walk fast and even run! Thus we went for a 5-mile walk/run at the Biltmore. 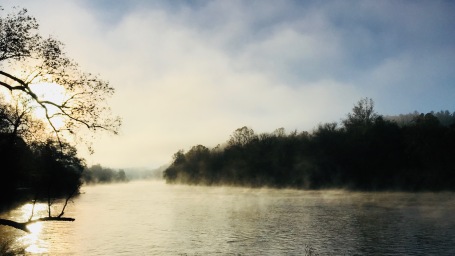 Luke joined me in the gym/garage for today’s workout.

This was fun, as any workout that has rest programmed forces one to work fast and steadily during work time, and that’s what I did, completing all rounds in unbroken reps. And 135# power cleans now feel relatively light. Yup, rounds took about 45 seconds to complete.

I purchased two large bags of candy and we didn’t have a single trick or treater. Dammit. 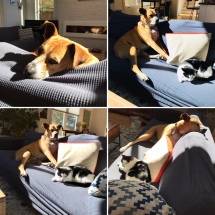 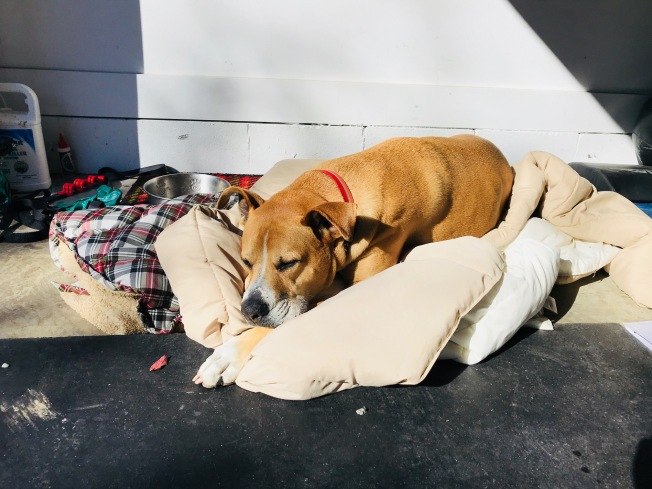