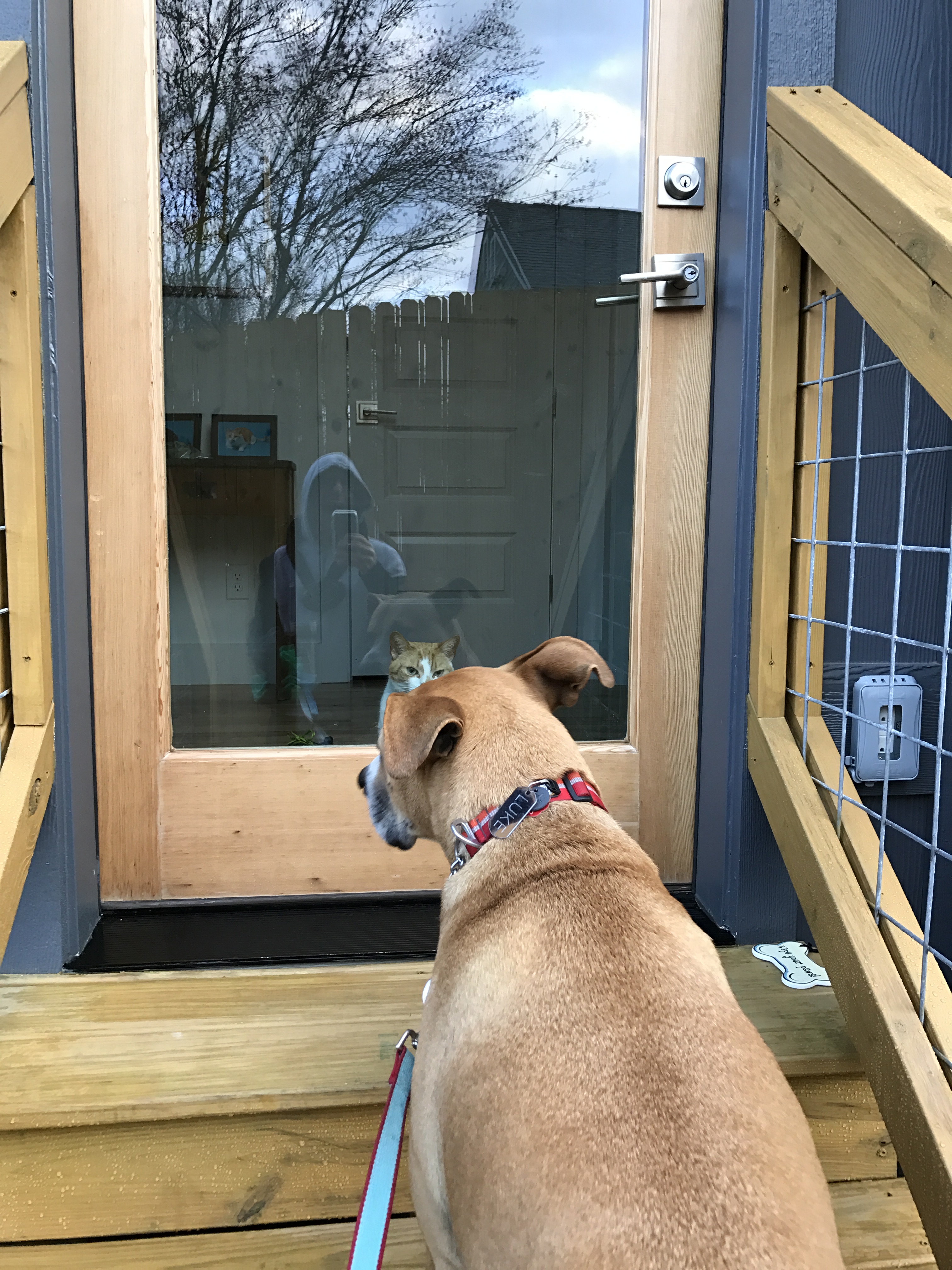 I didn’t CrossFit Friday, Saturday, or Sunday. I did, however, go for a very good 7-mile run at the Arboretum on Saturday. I would’ve run farther if I had remembered to wear Bodyglide. Ha!

I’m nonetheless staying active, as Luke and I have been going for an hour to a ninety-minute walk in the morning and a 30-minute walk in the evening. We’ve been known to go for three walks in a day. I want to make sure he’s getting lots of attention so we go to the dog park every other day.

Katie led the 9 am hour, and this is the first session that she’s coached that I’ve attended Leslie was the only other attendee.

I’m still trying to build my lost strength. I wasn’t, however, feeling very strong, so I settled on 75#. To make the workout a little more challenging I completed all T2B strict with straight legs. That’ll slow you down, folks! I completed all T2B in 3 unbroken reps, ensuring that I started and finished at full extension.

I felt tired and was, well, disinterested. Did I mention that I don’t usually look at the WOD until I arrive? The second pull caused pain, so I only worked up to 50#. You read that right. (BTW, I saw many PS + OHS for OHS.)

I overheard an 8:30 attendee telling Coaching Mark that the rest was too long. Uhm, the focus was to complete all 4 rounds in the same amount of time, and in order to do that, well, you need rest. Ask the coach the rationale for the programming, don’t tell them how to program.

The only issue I had was with the course, as it took me 4 rounds to finally see the mark for the turnaround. The first round I ran maybe 10m too short, and the second and third rounds I ran probably 100m too long. Ha!

I settled on 35# DBs, as we were encouraged to complete in unbroken rounds, although I observed most athletes breaking up into sets. I could’ve and maybe should’ve gone heavier.

I was referred to as “another old, fast guy.” I don’t know how I feel about that.

I did take the lead from the first round. Other athletes tried to encourage Jen, who’s known as a very fast runner, to keep up with me.

CrossFit Surmount has many more sessions and fewer coaches. I don’t know that there is room for another coach, and I don’t know that I’m still interested in coaching. It’s been kind of nice just going to the box and working out. This certainly allows time for my other projects.

What another beautiful day! I ran from door to do, this time heading North toward Haywood first, running the single trail along the Swannanoa Rivers and then running through French Broad, Amboy, and Carrier Parks. ‘Twas exactly 5 miles.

I averaged 8:32 mpm pace. Given the steepness of many of the hills, I was happy with the pace.

Uhm, yeah, so I checked the schedule at CFA and was certain that there was a session at 9. As I wanted to ensure that I warmed up on my own, I arrived at 8:47 only to discover that the session had begun at 8:30. Dammit. Coach Mark invited me to warm up on my own and jump in but I informed him that there was no way that I was ever going to do that. If you’re on time, you’re late. If you’re late, don’t bother. And you only have yourself to blame if you’re late.

I ran up Steep Hill until I reached Owls’ Ridge, and ran on that trail for the very first time. There were quite a few times when I said to myself, “It’s so fucking beautiful.” And it was. I had intended to run maybe three miles and ended up running seven and a half, averaging 8:54 mpm. Yup, there are some very steep hills and some very challenging single trails. Yay!

Sometime during the early morning hours I dreamt that I looked into the sun. ‘Twas merely a very bright flash of lightning that, even with the blinds closed, I could see behind closed eyes. Then it started thundering very loudly, perhaps the loudest thunder I’ve heard. The sound of the rain was soothing.

I awakened at 6, fed Luke and the bad kitties and then took Luke for a long walk, intending to attend the session at 9. I arrived home at 7:30, glanced at the CFA schedule, and realized that there was a session at 8. I hauled ass getting ready, and arrived at 7:55.

Uhm, I can’t remember the name of the coach.

I completed strict weighted ring dips beginning at 26 and ending with 53#. I could’ve gone heavier, and this came as a welcome surprise.

Lots of descending ladder metcons at CFA. As I hadn’t had anything to eat since in about 14 hours, I felt lightheaded most of the session and particularly during the metcon.

And even though I chalked my hands, I tore the skin off of what used to be a callous under my right middle finger. This happened during the round of 30 swings. Gah!

The only round I completed in unbroken reps was the very last round.

Not sure that saying “relax” is a very good coaching cue.

One thought on “Ups and Downs”