I coached all morning sessions, including 11:45, as well as the 5 and 5:15 sessions. I gently requested that Jeff lead the strength and conditioning sections of the 6:30 session. He obliged.
Metcon (Weight)
Every other minute for 10 rounds
1 power clean
1 front squat
1 push press
Increase weight as form and execution improve

This went much better than expected. I began at 95# and worked up to 155#. The last round felt awesome. Yup, I probably should’ve gone heavier.

Wow, I witnessed far too many people rushing through the back extensions, i.e., not holding for a count of “one-one thousand.” I did not. I worked consistently and finished 15 rounds + 1 wall crawl, 16 sit-ups, and 1 back extension.

I honestly don’t know how it would be possible to complete 16 rounds unless, of course, one altered time and space.

I worked out at 7 am merely because only Danielle attended the session and I didn’t want her to work out alone. I’m just that nice.

What an exhausting day! I coached all of the sessions except 9:30; thus, that was my only time to work out. Coach Deborah did a very nice job of leading. Thanks, Coach Deborah!

I last completed this workout July 30 of last year with a score of 18 rounds and 21 reps. I set a goal to complete 20 rounds. Yes, 20 rounds. I was excited to attempt, as I remembered how challenging the workout was − but I know that I’ve gotten stronger, particularly with deadlifting.

I set up my station near the garage door, as it was a beautiful day and I wanted to enjoy the sunshine and cool breezes. The barbell was on a platform, with the box to the left. I lined up two rows of 10 poker chips. The clock counted down and we began.

The first round of deadlifts went well and, dare I say, felt light. Well, at least lighter than I expected. I quickly completed five reps, dropping each rep from the top. I then quickly completed 13 unbroken pushups and 13 box jumps. Yes, 13. Dammit. I thought, “I was only supposed to do nine. Why did I do 13? Should I subtract four and only do five reps the next time? No! It’s a hero WOD! It’s your mistake, so live with it.” So that’s what I did.

I was exceedingly (yes, exceedingly) pleased that I was able to complete all rounds of five deadlifts “unbroken.” I put unbroken in quotes because, whilst I did drop form the top, I did immediately set up for the next rep. No rest for me!

I completed the first 17 rounds of 13 pushups in unbroken reps and broke up the last rounds into 2 or 3 sets. I nonetheless rested very briefly.

I completed many of the rounds of box jumps in unbroken reps but did miss a few reps in that I didn’t fully extend hips before jumping off of the box. Yup, I redid reps.

I had completed deadlifts and some of the pushups of the 11th round when Coach Deborah announced that we were halfway through the workout. I felt a sense of relief, feeling confident that I’d be able to complete my goal.

I completed 20 rounds with one minute left. I completed five deadlifts and 10 pushups. Yay! 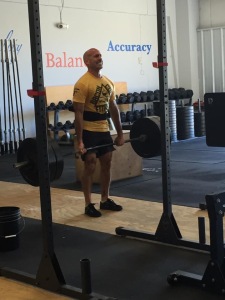 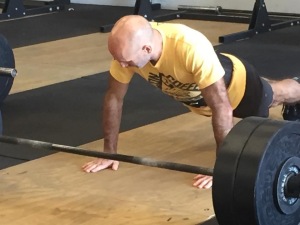