I worked out with the 6 am athletes, and Coach Nick led the session. As I suspected when I was programming, this was a challenging workout. Some folks have gone so far as to say it’s one of the most difficult workouts we’ve completed. I wouldn’t go that far…

My goal was to complete the workout in 6 minutes or less a round. I did so, finishing in 27:33.

Luke joined us for the first 400m run, but he was too focused on harassing Stephen. While Jaclyn and Stephen were leading the first 400m run, I was able to catch and pass them once I dropped Luke’s leash. I remained in the lead throughout the remainder of the workout.

What made this workout difficult was not the activities but the order of the activities. For example, I can easily complete 20 unbroken wall ball shots but wasn’t able to do so today. I completed the first two rounds in reps of 10 and the last three rounds in reps of 12 & 8. I was too concerned that I’d miss a shot if I continued past 12 reps, even during the last round.

I did complete all 1-armed KB swings and wall crawls unbroken, and I (of course) didn’t stop and walk during the run.

Luke, as always, was all up in my business during much of the workout. He immediately began kissing and licking me after I finished and continued to do so. He took some selfies with the two of us.

I changed shirts before beginning to coach the 7 am session. I smelled a rancid odor and my first thought was, “Who smells so badly?” I then thought, “Is that me?” I sniffed my shirt. Uhm, some protein drink had dripped out of my shaker bottle onto the shirt and the shirt had been sitting in my car for about a week.

I fortunately had a non-rancid smelling shirt to change into. You’re welcome. 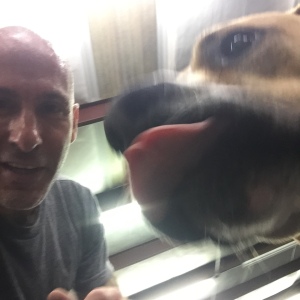 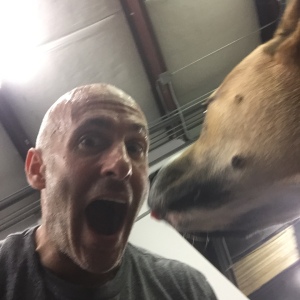 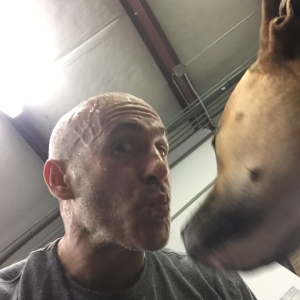