I coached the 6am and attended the 7am session at CFBC this morning. Kirk and I shared a somewhat lengthy exchange regarding the expectations for today’s WOD. As I coach the first session on Thursdays, I like to make sure I do things correctly. I’m just that nice.

Kirsten, Daryl, Tom, Sue, Jazzi, Jill (who’s a hoot and a half), and David attended the 6am session, and all were spectacular. None more so, however, than Sue, who completed reverse Jackie faster than forward Jackie. I’ve never heard her yell “Time!” so loudly or enthusiastically!

I led both sessions through a warmup. Josh informed me that we might want to record warmups and sell the series. I think that’s called “infotainment”.

10-minute time cap for both Jackie and Reverse Jackie

To the best of my recollection and searching abilities, I had not attempted this benchmark WOD prior to today, although I’ve coached it a few times and completed modified versions. As is often the case, after having coached the WOD I had little desire to complete the WOD. I honestly had no idea how long it would take me, but only hoped I’d be able to complete within 10 minutes.

I was full of excuses this morning. “I’m a slow rower because my legs are so damn short.” “I slow down with pull-ups because I haven’t yet learned how to butterfly.” “Forty-five pounds is a third of my bodyweight.” I wanted to tell myself to shut the frack up. (I’ve learned that both “frak” and “frack” are acceptable spellings of the word. I prefer “frack”.)

My goals were to row at or below 22 s/m, to complete thrusters in reps of 10 and to rest the bar behind my neck, and to just make it through the fracking pull-ups.

Uhm, so I like really kept the strokes per minute less than 22, often falling below 20 and as low as 18. I nonetheless rowed at about a 1:56/500m pace, and I’m fine with that. I wasn’t even the first person off of the rower. (Joe, were you off of the rower before me?)

I completed 4 sets of 10 thrusters, and the last 10 in 2 sets of 5 reps, and I’m fine with that. As I had warned others, even 45 pounds begins to feel heavy when you’re doing so many reps.

I completed pull-ups in 4 sets of 5 reps, and the remaining 10 doing whatever it took to ensure that my chin went above the bar. The 30th rep was indeed a single, and I’m fine with that. I called “Time!” at 8:26. While not my best performance, (you guessed it) I’m fine with that.

I was the first to finish of the 8amers, not that Joe Alexis Martin Chris Nadia Josh anyone was keeping score.

I rested exactly 5 minutes and the sheer drudgery began.

Thrusters were much more challenging this time around, and I frequently gently placed the bar to (i.e., not just dropped on) the floor. I completed in reps of 10, 6 sets of 5 reps, and 10. I had already begun to grunt loudly.

Rowing was miserable. Just miserable. In fact so miserable that I stopped rowing after 250m. I’ve never stopped rowing in a WOD before! My left shoulder was on fire. I informed Josh and he suggested that I stop at 500m. Do you even know me, Josh? My pace was 2:07/500m, i.e., sloooooow. And I cared naught. With just 200m left I sprinted if for no other reason to get the fracking rowing over and done with. Joe made a comment that I didn’t quite hear over my own grunting, but I imagine it was this: “Paul’s grunts are awesome! I only wish I could record the sounds, you know, for my spank bank.” 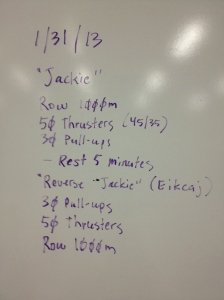 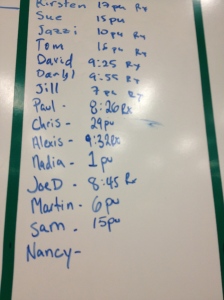