I led the 9am endurance WOD, and two were in attendance: Jayme and Rick. Many people were out of town, the “31 Heroes” WOD was taking place at the same time, and the endurance WOD may have frightened some people. (I’m talking to you, Jay.)

It was Rick’s first time at an endurance WOD, and he did very well. Jayme made it look far too easy, but she did flip me off at least once. This is always a sign that the WOD was challenging. Ha! This is a Paul original, and I’m anxious to try it myself.

Dave led the 10am session, and the entire time was devoted to the Hero WOD.

From CFD: On August 6th, 2011, 31 of America’s bravest warriors gave their lives in defense of our freedom. While we’d like to leave the responsibility of announcing their names to their families & the DoD, for now we will honor them by mentioning their roles in our military.  They were 17 Navy SEALs, two Navy EOD Technicians, three Naval Special Warfare Combat Support Sailors, two Army Aviators, three Army Aircrewmen, three Air Force Special Tactics Operators, and one Military Working Dog.

These men were sons, brothers, husbands, fathers, and friends. Not only do we thank them for their service and sacrifice, but we thank those that love them for the sacrifice they have made as well.

The 31 Americans were not the only ones that died as heroes that day. While the funds raised through the 31Heroes event will benefit the families of the men listed above, we cannot forget the sacrifice of our Afghan comrades. Seven Afghan commandos and one Afghan interpreter were also killed in action and we cannot look past their sacrifice. They too are heroes and we thank them and honor them and their families.

I was delighted when Brad asked me to be his partner for this WOD! While we could have used separate bars for thrusters, we both settled on 95 lb. Brad originally suggested 105, and in retrospect we probably should have gone with that weight. Dave informed us that that thrusters were meant to be heavy, and that we should be doing them one at a time during the last rounds. Even during the last rounds, I was able to string together 2 or 3.

As CFD doesn’t (yet) have a 15 foot climbing rope, we substituted 36 towel pull-ups. I’ll describe as best I can. Throw a towel over a pull-up bar, and grab the ends with either hand. Pull 1 hand down as the other hand goes up to the bar. Do this 36 times per round. Yes, 36 times.

Yes, thrusters are always a challenge, but for whatever reason, 30″ box jumps frightened me today. I only completed 1 warmup 30″ jump before the WOD, and even that felt shaky.

Brad and I did an awful job of keeping track of rounds and reps. I blame Brad.

This was miserable. I took off my shirt after the first round. Why the hell not? I began with the 400m run, holding the sandbag across both shoulders. This interfered with my breathing, as I had to tilt my head, so for remaining rounds I carried the bag over alternating shoulders for 200 or 100m. I ran all rounds of 400m.

If I recall, I started with thrusters. I was able to complete first round of 8 unbroken. Dave or Stew or Troie or somebody kept telling me to keep the weight in my heels. It sounds like something Dave would say, so I’m guessing it was him.

Towel pull-ups were surprisingly easy, and I was able to complete 36 unbroken for the first 20 or so minutes, and then in reps of as few as 6 and as many as 20 during the last rounds. 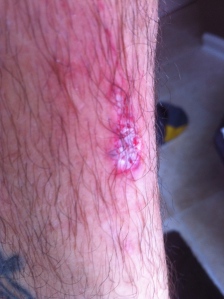 By our estimation, we completed 10 or more rounds. Nice working with you, Brad! It’s awesome when Michael Kelley is out of town. He doesn’t like to share me with anyone.

I was spent and quite dehydrated by the end of the WOD, and only had 5 or so minutes to prepare for the Community WOD.

Uhm, it was the biggest crowd yet, and I’d estimate that there were 25 in attendance, including Jeff, Tegan & Ken, Michael, Wendy, Kate & Cris, and Dave. Today’s skill was kettle bell swings, per Cris’ request. The WOD was a 15-minute AMRAP of 7 pushups, 9 KB swings, 11 air squats (or jumping air squats) and a 200m run. All seemed to enjoy! And all seemed completely exhausted by the end.