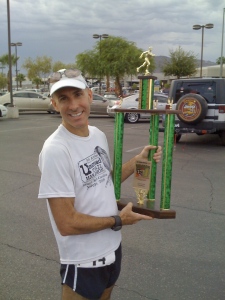 Location:  Las Vegas (Henderson, actually), NV
Time:  18:23
Place: 1st
What better way to spend a vacation-day morning than running a race! We’ve certainly built our vacations around marathons in the past. We did not build our vacation around this 5K — it just happened to coincide with our stay.
My favorite number is 14. My bib number was 14. Jeff had a good feeling about this race, and he was right. It was indeed the first 5K I’ve ever won. It wasn’t a very competitive race, but I won nonetheless.
The race started and finished behind and beside a Saturn dealership.  It was a relatively low-key and certainly small race. I warmed up ahead of time, and it was indeed warm. Probably in the mid-80s to low-90s. It was interesting to hear people talk about the humidity. Yeah, humidity. 23% humidity. That’s nothing compared to our summers in NC!
For the most part, the course was out and back. I warmed up with others at the front of the pack, and while stretching struck up a few conversations. There was a man wearing bib #1. He let me and a few other runners know that he traveled from Cincinnati (or maybe Cleveland) and had only had 3 hours sleep. I, of course, accused him of sandbagging.
The race started a little late. Bib #1 and a young kid took off, as did I. I passed them both within 50 meters. I could hear the young kid behind me, so I slowed down a bit to run with him. I asked him what he expected his finishing time to be, and he said in the 17s or 18s. I wasn’t planning on running less than an 18, so I encouraged him and told him we should run together for a while. And that we did! There was a slight uphill to the turn-around at mile 1.5, and as we ran toward it I asked him if he was going to get a drink. He was breathing very heavily, and I thought it might help him. He said, “No, I don’t want to slow down.” I said, “I’m going to get a drink so that I don’t slow down.” We both got a drink. 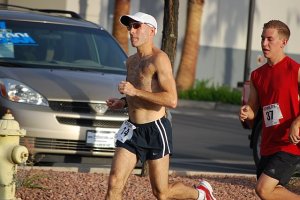 Of course what follows an uphill is a downhill, and anyone who knows me well knows that I work every downhill. Even a slight downhill. I dropped him very quickly, and he faded fast. I basically shut it down at mile 2, and didn’t even kick the finish.
Yes, I could have run faster. I also run faster when I’m being chased.
The race was called the million to one because one person (drawn at random) received the interest earned in a day on one million dollars, something like 50 bucks. We didn’t hang around for the drawing. 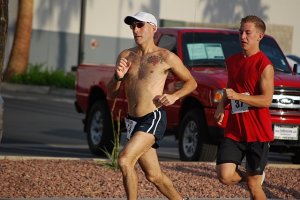 The first prize trophy can only be described as Las Vegas style. It was so big that it wouldn’t fit in our luggage. We began to disassemble it, but I was afraid we’d never make it past homeland security.
A picture of Jeff taken after the race. 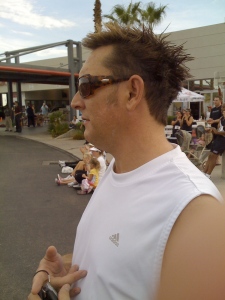 Place:  2nd overall; 1st male
Location:  Durham, NC
Oh, how I hate to race a 5K. I’d much prefer a marathon, or at the very least a 10K. The only strategy that ever works for me is to run hard for the entire 3.1 miles. Given that I’ll be running the Triple Lakes 40-mile trail race in just a week, I didn’t want to kill myself. And I didn’t.
The race started a little after 9 am in a neighborhood across from Homestead Market and Fitness World gym. There was a Kenyan contingent, including at least two males and one female (who eventually won with a time of 17:11), as well as some younger males (probably high schoolers), and the usual ilk. Well, not really usual since I didn’t recognize a single person. I really haven’t been running many local races, though, and certainly not any 5Ks.
The gun started, and a mad rush of people took off. In fact, I was probably in 12th or so place at the 1/2 mile mark. There were many uphills and downhills, and I began to pass runners, usually one at a time. I wasn’t keeping track of my position, and I’m not quite sure why not. Once we left the neighborhood, we started running on a paved sidewalk about two-persons wide. I passed mile 1 in 6 minutes flat. I caught up with a runner (probably the 8th or so runner I passed) and said, “Good job.” He said, “You, too.  Let’s run together.” I feel bad about the next thing I said, but I truly meant it as encouragement. Something tells me it didn’t come across that way… I said, “You’ll have to keep up.” By this time I had already put 20 meters on him, and I honestly didn’t want to slow down to run with him. I did make sure to congratulate him when he finished.
We then ran on the American Tobacco Trail. I ran on the gravel to the side of the paved path for most of this part of the race. At times I could see a runner ahead of me, but I wasn’t quite sure who it was or how many runners were ahead of him. I now know the runner was a her. I passed mile 2 in 12 minutes, so another 6 minute mile.
At about mile 2.5 I could hear another runner, but I did not look back. From the sound of his footsteps, I knew he wasn’t that close, so I didn’t worry too much, and I didn’t run scared.
I’m not sure what my time was at mile 3, as there wasn’t anyone providing splits, and my Garmin wasn’t tracking correctly.
We finally turned in to the same neighborhood where we started, passed the start line, and headed to the finish. Again, I could hear another runner, and I did take a glance or two. I don’t like to be passed, but especially not near the finish. Who the hell does?
I did sprint to the finish and handed in my electronic timer. (This was the first race I’ve run that used this type. It was somewhat heavy, and slid behind the bib. You had to wear the bib on the front of your shirt, and the race director passed a wand over it when you passed the finish line. I didn’t much care for it.)  As I had used the seal provided, the volunteer couldn’t easily remove the electronic device, so I gave him the whole bib. I usually keep them as souvenirs. The man running behind me who eventually finished second said, “I tried to catch but never could.”
Jeff met me at the finish (he was there at the start, too), and mentioned that the Kenyan couch was freaking out. He kept saying that his runners would finish in 15 minutes, and when they didn’t he kept asking the race director and volunteers if the course was clearly marked. It was, because if anyone can get lost it’s me! The volunteers were also very good a pointing runners in the right directions at the turns. Anyhow, I’m not sure what happened, and I don’t remember passing them. With the exception of the “run with me” fellow, I don’t remember passing any other specific people either.
They had drawings for many door prizes. The announcer said, “This is for a $100 gift certificate for a Healthy Balance massage. And the winner is…” I said to Jeff, “Paul Potorti” just before the announcer said, “Paul… I may need some help with the last name.”
The same announcer presented the awards, and she did much better with my last name. I won a year membership to Jeff’s gym, i.e., Fitness World, and a $100 gift certificate for running shoes from Omega Sports. Not bad!
For a cool-down, I ran the course backwards. Yup, I got a little lost and ended up running 4 or so miles.
A well-run race and a somewhat challenging course.